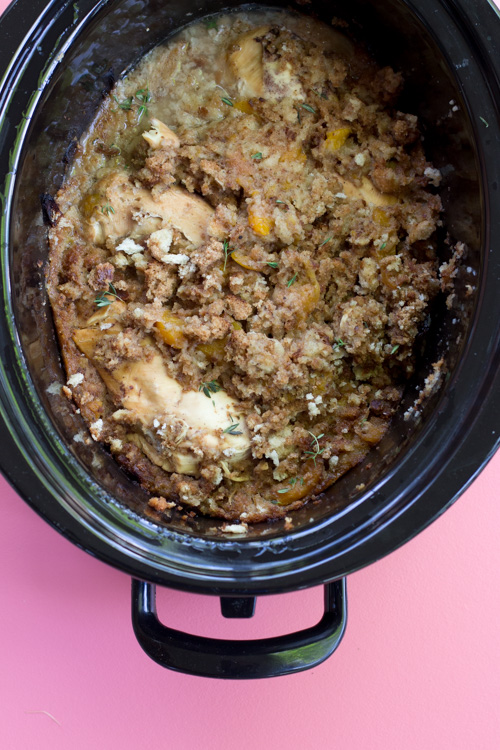 You’re going to love this easy recipe for crockpot chicken with peach stuffing.  The whole thing cooks in the crockpot – even the stuffing!

One of our readers sent us her favorite recipe for crockpot chicken with peach stuffing. We loved that it was a one-pot meal and that it contained a starch, which doesn’t happen that often in crockpot meals. I was also really intrigued by the use of allspice as I had only ever really used it in Jerk food like my Crockpot Caribbean Jerk Chicken Tacos.

Honestly, the only thing I changed about it was that I used frozen peaches instead of canned peaches because canned peaches are often served in heavy syrup which isn’t that great for you.  I also used chicken broth instead of water to add a little more savory flavor. Oh, I also doubled the amount of chicken because we like leftovers! The first time I made it I used plain dry stuffing. It was delicious, but I decided to try it again using herbed dry stuffing and I liked it even more.

To Freeze and Cook Later

Label your freezer bag with the name of the recipe, cooking instructions, and use-by date (three months from when you prepped the dip).  To your freezer bag, add all ingredients, except for dry stuffing.  Remove as much air as possible, seal, and freeze for up to three months.  When ready to cook, thaw in refrigerator overnight or in morning in water and and then follow cooking instructions above. 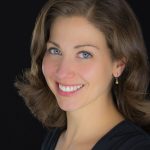 Jill Petrush Rogers is an artist and former bookbuyer/seller. Jill recently moved back to her hometown of Pittsburgh, PA with her husband, Tom, and their two energy-filled boys. Jill loves to channel her creativity by coming up with recipes as a contributing writer for New Leaf Wellness.

Stay in the loop with our weekly newsletter